October’s Stepmom of the Month is…

Like all of the Stepmom’s of the Month that came before Anita, it began with a man and falling in love.

After six month of dating, Anita finally met Jude’s son and thought he was a great kid. But like many of us, she didn’t want to force the relationship.

She remembers, “When I met my stepson, he had his own way of saying my name that has now spread throughout the family. When he first started seeing my name pop up on Jude’s phone he read it and pronounced it ‘Annatee’. At one point he suggested legally change it to this.”

I think these early moments we share with our stepkids can be the most memorable. When you’re just trying to fit in with your partner’s kid, a cute nickname doesn’t hurt!

Eventually, Jude and Anita married. “I have to say for the longest time and sometimes still, I don’t know where I fit in. I have had friend’s and family tell me I don’t count because I am “just the step-mother”.”

Despite any hurtful comments, Anita modestly says she has “a bit of a place” in her stepsons life. By the sounds of it, it seems like a lot more. I can tell how much Anita cares when she says that she feels it’s still her responsibility to be a positive role model, to encourage him to explore new things, to challenge himself, to be his healthiest, to be courteous, to develop a strong work ethic and to have integrity.

“I want the best for him, just like my parents wanted for me.”

Her husband and his family assure her that she is a a very important part of her stepsons life. And as stepparents, we need to hear those things. I think many of us feel insecure, especially in the beginning. We love to hear words of encouragement, especially when we’re trying so hard!

“It can definitely be challenging to help raise a child that lives between two households, but I feel it’s likely much harder on him to live this way, and all I can do is do my best to give him the best life we can day to day when he is with us.” 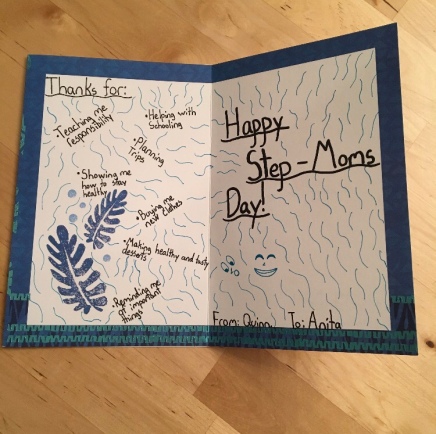 Anita has chosen ‘Namaste’ perfume as her free gift!

Will you be November’s Stepmom of the Month?! Message me and tell me your story!

P.S. I  am not going to try to sell you perfumes! A good friend of mine sells them in her hair salon, so I make them for that purpose. I am simply giving one as a free gift if you are virtually crowned “Stepmom of the Month”!